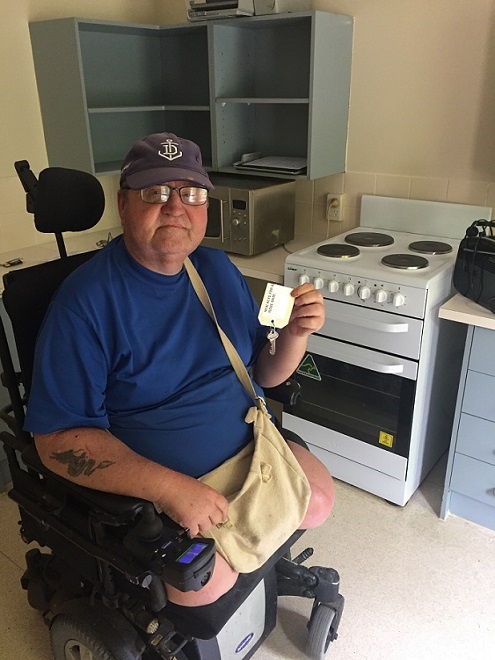 Neville* was over the moon on moving day! For Neville, this move means regaining his independence. “I have so much room now. I have a kitchen with enough space to cook for myself!”

Life has been tough for Neville. He tragically lost both of his parents and his brother within just a few short years. This loss struck hard, and he ended up homeless in Adelaide, sleeping rough.

It wasn’t much later that Neville received the devastating news that he would need to have one of his legs amputated due to ongoing health issues.

Neville took this as a wake-up call, and he began trying harder to get on top of his health, and managed to gain accommodation. Tragically though, only a year later he received the news that he needed to have his other leg amputated, which meant he would now have to live in a wheelchair, and his current accommodation was no longer suitable. It was tough.

"My new home has enough room for me to cook for myself."

For over two years Neville lived in restrictive conditions, struggling with everyday tasks and personal care before he became engaged with the Aged City Living Program here at Hutt St Centre.

Through this donor funded program, Neville could be more socially active, and make new connections, but most importantly, he received the support he needed to gain accommodation that was better suited to his needs.

His new home has given him a strengthened sense of independence, and simple tasks like showering and cooking for himself will now be much easier. Neville has told us he can’t wait to make himself a roast to celebrate the move. We couldn’t be happier for him.

Thanks to the support of people like you, we are able to support people like Neville to live independently and feel connected.

Back to Word from The Street, Autumn 2018

*Names have been changed to protect the identity of people who have kindly allowed us to share their story.