Angela* was in her early 60’s when she started coming to Hutt St Centre last year. 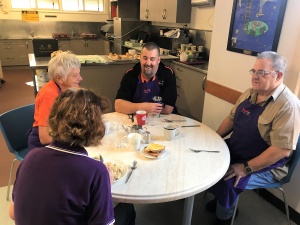 She’d spent 9 months sleeping on the streets of Adelaide, completely isolated from the community. Angela’s marriage had broken down before this; then she lost job. Combined, both events led to her being unable to pay her rent and bills.

With no children or siblings to stay with and both parents long gone, Angela felt more alone than she’d ever been in her life and had nowhere to turn.

Her confidence and self-esteem had ebbed away completely and her mental health was taking a sharp decline. She simply couldn’t see a path forward.

“I just wanted to be anonymous; I wanted to disappear.”

With no other options and feeling too undeserving of help to ask for it, Angela ended up on the streets.

She was both terrified and humiliated by her circumstances and isolated herself from the world, avoiding others at all costs. She’d lost faith in humanity, but that included herself.

Angela lived this way for more than half a year; snatching pockets of sleep on park benches and in grandstands. She slept mainly during the day, because she felt so unsafe resting by herself at night.

“You might go to sleep in the parklands and never wake up, because someone might attack you,” said Angela, visibly shaken at the memory of that fear she’d felt.

“Instead of sleeping, I had a routine going to the same places each night that I felt safe in with my sleeping bag and a huge backpack that nearly broke my back every time I picked it up.”

One morning as the cold, winter months were approaching, Angela saw a man she recognised as another ‘resident’ of the streets heading in to Hutt St Centre. She didn’t know much about what the Centre offered and didn’t want to draw attention to herself by asking, but she followed him in that day and had a hot cup of coffee and a warm shower.

Both were a welcome relief after a night spent wandering the streets, scared for her own safety. She began coming in each morning, quietly making herself a cup of instant coffee and washing herself free of the grime of the city streets.

After a few weeks, a woman began a conversation with her who turned out to be a case worker and slowly, gently, they began working together.

The case worker told her about the meal centre; that she could get breakfast and lunch there. It took some time for Angela to have her first meal there because she was overwhelmed by the amount of people in the room at first and would rush back out. Finally, she began to work out that if she came to the Meal Centre towards the end of the meal service, the centre was starting to clear out of people.

She would wait until one of the two back tables were free so she could sit in one of these and see the rest of the room. She always felt safer when she was aware of what was going on around her.

The Meal Centre was a warm and welcoming place to come after a night spent on the streets, scared for her own safety. The volunteers and Angels in there always gave her a friendly welcome. It was them who helped Angela reconnect to humanity, although it took some time.

“I just wanted to be anonymous when I first came in to Hutt St Centre and had breakfast or lunch in the meal centre,” said Angela.

“At first I didn’t talk to anyone, but then people started saying hello to me by name. I was surprised and scared about this; how did they know my name?? I didn’t like it. So then I asked my case worker and she said she’d asked them to keep an eye on me, because she was worried about me. So then I started saying hello back to them. Sometimes it was just hello; sometimes I could manage a short conversation. That was nice; it was a good feeling. I think that was a bit of a turning point.”

Within a month of her coming through our doors, we’d got Angela into a bedsit of her own on the city fringes. It was small, but perfect for her needs and gave her the space she needed to rest and recover from her months living on the streets.

“When I first got my house, all I wanted to do was sleep. My case workers even got an ambulance out because they thought I’d taken something or overdosed. But I don’t ever take any kind of drugs or any kind of even pills at all. I think my body and my mental state were just so exhausted after all those months of having to be alert on the streets; not ever sleeping properly. I was just sooo tired.”

Having a place to rest and feel safe were crucial for getting Angela’s mental health back to a good place; to feeling like herself again.

“I also realised how much better I feel when I come in to Hutt St Centre and have a good, healthy meal; that’s something that’s really helped me feel much better. And now I also take the time to find out more about what’s going on in the world; watching the news and things, so that I have things to talk about with people. It’s nice now, people in the Meal Centre saying hello and talking to me. I realised that some people actually like me; as a person. At first, I didn’t think anyone could or should like me. But now I feel better and realise that they can.”

Coming in to our Meal Centre after sleeping rough was the first small step Angela took in asking for help and reconnecting with humanity.

*Name has been changed to protect the people who generously share their stories.